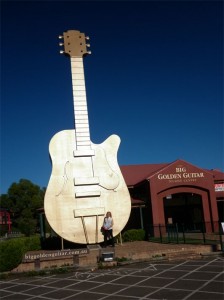 Here is a little about the Golden Guitar. It is one of the many ‘big” attractions that can be found around Australia. Located in Tamworth, the monument is one of the best-known points of interest in New England, New South Wales. It is also a major attraction during the Tamworth Country Music Festival

The Golden Guitar was erected in front of the famous Longyard Hotel on the Sydney Road in 1988. It was unveiled by Australia’s most popular country music artist, Slim Dusty. Its location in Tamworth is symbolic of the city’s recognition and celebration of Australian country music, and its artists. 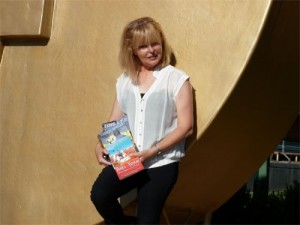 An award ceremony takes place every year where miniature Golden Guitars are given as awards to artists and musicians in recognition of their achievements and contributions in the genre of country music. An estimated 3.6 million photographs have been taken of the site since its opening.

The Golden Guitar stand approximately 12 meters (40 feet) high and weighs over 500 kilograms (over 1000 pounds). It is constructed out of fiberglass and wood, with steel reinforcements. The Golden Guitar has no strings because it was modelled directly on the Golden Guitar trophies given to winners at the Country Music Awards of Australia ceremony night during the Tamworth Country Music Festival.